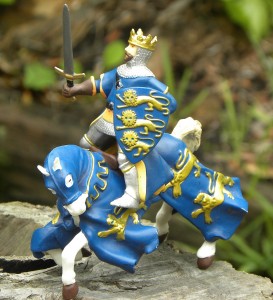 Iâ€™m a big advocate of being a gentle online champion. Not slaying dragons and wielding swords but following a code of chivalrous behaviour.

Why should I champion others?

There are two major reasons.

Firstly, itâ€™s the generous and right thing to do.

You can find incredible content on the web. And I mean incredible.

Stuff that makes the mainstream media look shabby, clichÃ©d and badly done. These days I often read articles in newspapers and think, â€œhmmm, so-and-soâ€™s blog did this topic so much better.â€

And people are out there giving away this great content for free.

If you read, listen to or watch something that resonates with you, the very least you can do is thank the person who made it. And then retweet it for them. Pay them with eyeballs. OK, not actual eyeballs because that would be weird. And probably illegal.

Secondly, being a champion is the smart, strategic thing to do.

If youâ€™ve spent time showing up at someoneâ€™s site, commenting, engaging and being an advocate for them, they are far more likely to give you a bit of hawt internet loving in return.

I read somewhere that only one in ten reader leave a blog comment and my own numbers back that up. So if you comment on someoneâ€™s stuff, youâ€™ve just made yourself stand out. If you consistently leave insightful, considered comments, then youâ€™ve just lit yourself up like a delightful sparkly Christmas tree.

For example, if you email me cold, I will be polite and I will try to respond to you. But if youâ€™re asking me for a favour that doesnâ€™t benefit me and I donâ€™t have a clue who you are, then youâ€™d better hope itâ€™s an interesting one!

if you regularly comment here or talk to me on Twitter, Iâ€™m far more likely to go that extra mile for you simply because youâ€™re already on my radar. I wonâ€™t be rude if I donâ€™t know you but itâ€™s far easier to grab my attention if youâ€™ve made the effort to get to know me first.

This is just human nature. Itâ€™s the old â€˜who you knowâ€™.

So how do I do this champion thing?

Find the people you admire online and love on them hard. Tweet their stuff, link to them, from your blog, comment on their posts, podcasts and videos. If you use their photos or art, link to them.

Of course, like many things in life, thereâ€™s the wholesome-apple-pie way to do this and the â€˜please donâ€™t call me again or I shall contact the policeâ€™ way.

The right way to be a champion

Good
Give your loyalty to those who deserve it â€“ the talented, the wonderful, the people who brighten your day. It doesnâ€™t matter if theyâ€™re already internet famous. Go on merit.

Bad
Sucking up to people just because they could help your career. Donâ€™t do it. Itâ€™s sleazy and people pick up on it.

If youâ€™re only being nice to me because you think I could help you, youâ€™re going to make me deeply uncomfortable and embarrassed. And Iâ€™m British, so if you embarrass me, I’ll pretend you donâ€™t exist. Politely.

Also, are you kidding? Iâ€™m nobody â€“ Iâ€™m famous to about 5 people in Arkansas!

Good
Focus on your audience, not theirs.

Instead of trying to get your stuff in front of the other personâ€™s audience (by leaving spammy comments, for example), focus on bringing their good stuff to your lovely people.

Needy often manifests as nagging. Iâ€™ve had people do this to me and nothing put me off quicker.

If it seems like the person is ignoring you, donâ€™t push it, just carry on being an advocate. Maybe theyâ€™ll get to liking you, maybe they wonâ€™t. It doesnâ€™t matter because youâ€™re not doing it to be liked, youâ€™re doing it because you like them. Getting on their radar is a wonderful by-product but if it doesnâ€™t happen, it doesnâ€™t make either of you a bad or worthless person. Leave your ego at the door.

In weird coincidence land, Mars Dorian covered this technique the exact same night that I wrote this.

Elizabeth Potts Weinstein from Live Your Truth explains why seduction is the best way to pitch to her in this video post.

This article on Facebook faux pas makes a lot of good points.

How have you been a champion? Has it brought you success and useful connections? Got any tips? Tell all in the comments…

19 thoughts on “Succeed Online: champion others”