I’m Kirsty Hall, an artist based in the lovely town of Hebden Bridge in West Yorkshire. 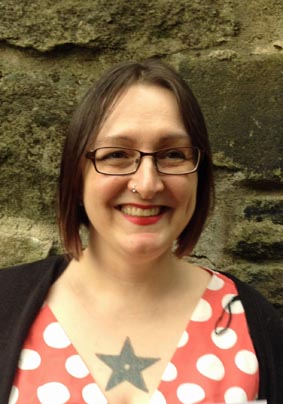 I describe myself as ‘an artist and purveyor of obsessive projects’ for reasons that will quickly become apparent if you check out my gallery pages.

I am prone to all-consuming art projects that take years to complete. My family likes to say that I’m never happy unless I’m doing something until my fingers fall off. This has never actually happened but when I was tying thousands of knots in string I did get some nasty blisters.

During 2011, I nearly drove myself insane doing a year-long project called 365 Jars, where I released an art jar into the wild (almost) every day. It was basically a cunning excuse to get myself out for a daily walk. I’m sneaky like that. Resolutions? Pah – art projects are the way to get things done.

I’m currently sticking pins through a huge bit of fabric, cutting holes in an old blanket, taking courses in ceramics and noodling about in the studio with matchboxes. I also do a lot of drawing. Fortunately for all concerned, drawing is usually quicker. Apart from 2007, when I spent an entire year drawing on envelopes.

See, I wasn’t kidding about the obsessiveness.

Unfortunately I have ME/CFS, which seriously impacts my life and my art career.

When I’m not making art or bedridden with my illness, I bimble around the place reading, knitting, gardening, having fun with my delightful husband or texting my grown-up son. I used to be the President of Hebden Bridge Women’s Institute and I’m still a member. I also spend far too much time on Twitter, which is a great place to get to know me better.

Anyway, here’s my CV. It was boring, so I added some pithy comments…

First Class BA Hons in Sculpture, University of Gloucestershire, 1999 – 2002
After failing college twice when I was younger, I cried my eyes out when I got a First.

2009
Pin Ritual – Prick Your Finger, London
It was fun to show in an alternative haberdashery/art space. You know, it’s not often you get to write that phrase.

2007
The Diary Project – The Internet

2006
Broken Threads – HERE Gallery, Bristol
You shouldn’t attempt to make brand new work two weeks before your first solo show. Do not ask me how I know this.

2010
52, Room 212, Bristol
I made a brand new piece for this show, 52 tiny drawings suspended with thread. Fun to make but an absolute sod to hang because I had to get all the threads just right.

2009
Front Room Arts Trail, Bristol
Handy tip: People want to talk to you on art trails – don’t attempt to do a performance wearing a gag.

2007
Threads of Meaning, Chapel Gallery, Ormskirk
I sold all three pieces in this show. I was speechless with shock.

Temporary – March Town Hall, March, Cambridgeshire
The first time 3 Score & 10 was shown. I sent it off all neatly coiled and it came back all tangled. I decided I liked it much better that way. It was nothing to do with the fact that I didn’t want to untangle 70 strings. Nope, not at all.

2005
24 Frames a Second – HERE Gallery, Bristol
I made something stupid for this show. We will not talk of it.

Knit One, Build One – HERE Gallery, Bristol
I knitted a brick. What? I did.

2004
Perpendicular – St Nicholasâ€™ Church, Gloucester
Crazy church, not a single straight line in the place. But a beautiful space to exhibit in.

Out of the Blue â€“ HERE Gallery, Bristol
Another show that I curated with a friend. Wow, 2004 was pretty busy.

Blue Sky Thinking – Stroud Valleys Artspace, Stroud
I made porridge at the private view. Definitely my most delicious private view.

Food, Glorious Food – 20-21 Visual Arts Centre, Scunthorpe
The toffee keys got to meet the head of the Arts Council. Oh, the excitement.

Chapter and Verse – All Saints Church, Cheltenham
This one was in a crazy High Anglican church. It was quite hard to compete with all the Victorian gilding but we managed.

Speaking Volumes – Stroud House Gallery, Stroud
The toffee keys get their second outing. They get around, you know.

Test Tube – Stroud Valley Artspace, Stroud
Did one of my silliest performances. Was somewhat baffled when everyone took it seriously.

Degree Show – University of Gloucestershire, Cheltenham
Someone temporarily ruined one of my works. I cried hysterically in the bathroom.

2013
Curator: Haberdashery in the shop windows of Hebden Bridge.

2003
Curator: Diving Deep – Greenbelt Festival, Cheltenham
One of the best shows I ever curated. I was proud of this.

Initiator and co-organiser: The Numinous Impulse
A one day conference exploring the links between art and spirituality held at the University of Gloucestershire