So, the quest for a final list of goals is continuing apace. I’ve given myself until the end of the week to finalise it because for some bizarre reason, next week feels like the proper start of January to me. Don’t even ask, I have no idea why, I just know that I’m still mentally in an ‘in-between’ sort of space.

One thing I’ve definitely decided to do is 101 Things in 1001 Days. This online project involves making a commitment to complete 101 preset tasks in 1001 days, which is about 2.75 years. If you want to take part, there’s a list of criteria and suggestions here.

When I read about this on Eliza’s Back Yard blog, it totally freaked me out. I wasn’t sure why because I undoubtedly already have more than 101 things on my various to-do lists. After some thought, I realised that it was the time-scale that bothered me.

Now, I have no problem with the concept of doing something for a year, as The Diary Project amply shows, but the idea of publicly admitting that it might take me the best part of three years to complete things seriously bothered me. I’m not exactly your Go-To Girl when it comes to delayed gratification: when I have an idea, I want to do it right now. Actually, I generally want to do it yesterday but even I accept that this breaks the laws of physics because I don’t have one of these… 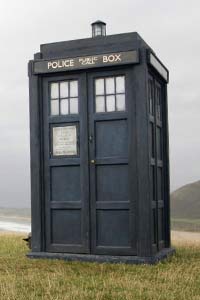 Yet conversely, I’m also The Queen of Procrastination and many of the things on my to-do lists have been lurking there for so long that they’ve become seriously embarrassing to me. This happens partly because I take on too much or commit to things out of a sense of obligation rather than a real desire to do them but also because my energy levels simply can’t keep up with the relentless slew of ideas that pepper my poor defenceless brain. My family have come to live in fear of the words, “hey, you know what would be a really great idea…”

But the fact that I was a bit afraid of the 101 Things meme made me think that it was probably an excellent idea to try it. Then it occurred to me that it could also act as a handy dandy place to hide all my ‘shoulds’, so that they weren’t on my official goal list. Hmm, perhaps I haven’t completely integrated that whole ‘only having positive goals’ thing yet!

Anyway, for both these reasons, I decided to go for it and enthusiastically started yet another database. However, after several days, I still only have about 75 things and I’ve utterly run out of inspiration. I could probably plump up the list with more things from my to-do lists but a lot of those are quick, small, one-off or rather boring tasks and I’m not sure they deserve to be on this big list. Plus, I’m still trying to stay mostly positive and only commit to things that I feel are worth doing or that are bothering me enough that I need them out of my life.

So I’m wondering if it’s acceptable to start with just 75 things and add the other 26 at some point in the next 2.75 years. Sigh, I suspect this means that I’m still having trouble with the time-scale thing – after all, how can I possibly know what I’ll want next year, let alone in nearly three? As you can see, I’ve never been one for Soviet style Five Year Plans but perhaps learning to think more long term is part of the reason for doing this.